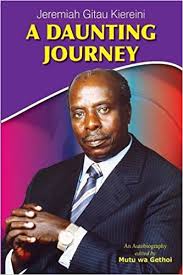 A Daunting Journey by Jeremiah Kiereini

I was so enraged at Muturi’s foul and vulgar insult that I decided I would shoot him. I went to my car in an overwhelming rage, to get my gun. I realised that none of the group knew I had a weapon, and, for a second, in a red blaze of fury, I even considered shooting them all! But as I walked out into the fresh air over to the parking lot and looked around at the everyday world surrounding me, I came to my senses. – JG Kiereini in A Daunting Journey
He is described as a Mau Mau oath-taker, seemingly of two minds – both for and against, loyal and disloyal. In A Daunting Journey, Jeremiah Gitau Kiereini, lets as into his life spanning three generations. He reveals insights into the influences and intrigues surrounding the early civil service and the powerful individuals who held Kenya’s future in their hands. Kiereini also exposes the dichotomy that irreconcilably split the communities involved in the struggle for independence and the personal contradictions and challenges he encountered as he sought to find pride and loyalty in service to a newly independent Kenya.
This is truly a fascinating chronicle that takes us from the humble and difficult years of childhood, through the Mau Mau years, the Kenyatta administration, the Moi regime, and on to the present in the life of Jeremiah Kiereini. Most captivating is the narrative on the infamous 1969 oath-taking commonly referred to as, `Caai wa Gatundu’ and the 1982 coup.
Kiereini’s autobiography is an amazing story of resilience, perseverance and sheer determination to overcome adversity and to serve his country. He tells the fascinating story of his life in a most lyrical and eloquent manner. Equally, he narrates the story of a fledgling nation and the men and women who shaped its destiny with the awesome insights of an insider.