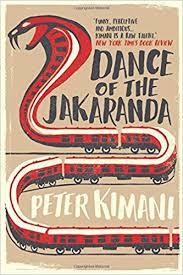 Dance of the Jakaranda by Peter Kimani

1963. Kenya is on the verge of independence from British colonial rule. In the Great Rift Valley, Kenyans of all backgrounds come together in the previously white-only establishment of the Jakaranda Hotel. The resident musician is Rajan Salim, who charms visitors with songs inspired by his grandfather’s noble stories of the railway construction that spawned the Kenya they now know.

One evening, Rajan is kissed by a mysterious woman in a shadowy corridor. Unable to forget the taste of her lavender-flavoured lips, Rajan sets out to find her. On his journey he stumbles upon the murky, shared history of three men – his grandfather, the owner of the Jakaranda and a British preacher – who were implicated in the controversial birth of a child. What Rajan unearths will open his eyes about the birth not just of a child, but of an entire nation.