1.Please tell us a bit about Oganga Mangiti the poet.
Well where do I start? Well, my full name is Benjamin Mangiti Oganga, in that order. When I started actively writing and posting my poetry, I wanted to fully identify with my African heritage first, before anything else, hence my first name was dropped, and I used my surname as my first name.
This year, 2020, will mark 10 years of me writing poetry, yes, it’s been ten years, I have a collection of so many poems that maybe one day will be published or just released, as well as some that have gotten lost over the years, but I try my best to keep everything together. I initially started writing to express my emotions, whether it was to profess my affection for a love interest or just write to express my mental state and help me deal with my emotions; and a lot of what I put out then was mostly for myself; I never shared any of it.
Fast forward to my period in high school, I wrote a couple of poems for my school’s music festival contest, and they got to Provincial’s which then was a big fete for me; I felt honored that I was a part of that. After that, I never really participated in Music Festival Activities, because I was actively involved in our school’s rugby team. The period after, just involved me writing for myself and those close to me.
In 2018, I got to a period of conviction to finally start putting my work out, with a lot of influence from close friends and peers who were blogging at the time. I started a new Instagram account in May and started posting my work out. The plan back then was to always be as consistent as I could, trying to post daily. This went on for a while, but towards the end of the year, I hit my first periods of writer’s block, when I could not write, so this was broken by periods of a hiatus, with me posting in between days in no particular order, with minimal to no writing behind the scenes. Then eventually, came the “Wednesday Feels” chapter, where I would post a poem each week on Wednesday, and I guess the rest is history.
2. What (or who) motivated you to title your book Love & Pain?
About the book, I always knew I wanted to publish a poetry book, I just didn’t know when, I remember joking with a friend that should I die without publishing my poems,that they should do it for me posthumously, because they had such a large collection of my poems.
The title “Love & Pain'” was not always the title of the book, it has morphed from different versions to become what it is today. I initially wanted to call the book, “The Heart Part I” and follow it with a couple more series, because it was always meant to be me speaking my truths and pouring my heart out. This further morphed into the title “Bloom” as a way of me growing from the emotions of love and pain that went into writing a lot of the pieces in the book. However, at the time, I felt I wasn’t ready to call it “Bloom,” as blooming represents a great period of prosperity and productivity, and I felt I wasn’t there yet as a writer, and it seemed to better represent the title of a later book.
My epiphany moment came way later on; the main themes the book was centered on, revolved around emotions of love and pain, and me coincidentally being a Gemini; it felt like this was the right path, plus the duality of my nature inspired me to put that into the book as my first works, hence using the words “Love & Pain” which in a way, can be said to be natural opposites. This was further split into “The Book of Pain” and “The Book of Love,” which are complete books on their own, and in a way represented the dual nature of Geminis; we can at times be two independent forces in one being, but at the same time, working in harmony that is the self, and the combination of the two books work just as harmoniously, and eventually create this story, that becomes a journey and eventually leads to some form of self-healing, which are some of the intentions of the book. I am not sure if people noticed, but the entire book together is some form of poetic word play; the title of the book is “Love & Pain,” so you would natural expect “The Book of Love” to come first, however, it’s “The Book of Pain” that comes first. I wanted my readers to first appreciate and understand the pain, before they jumped into the love, which in a way, combines with the purpose of healing; that after so much pain, comes so much love, hence you have the cycle, Love – Pain – Pain – Love (- Healing). The books of Pain and that of Love, are terminated by the “The Last Chapter” which is more intense than the actual book and limited to only 10 poems each. In “The Book of Pain,” “The Last Chapter” covers my darkest thoughts, while in “The Book of Love,” “The Last Chapter” covers my happiest thoughts as well as draws the entire book to an end, relating a lot of what has happened and been talked about in earlier pieces.
I have further released a physical Limited Edition version of the book, with only 100 copies, and each copy serialized. In the limited edition; “Love & Pain: Limited Edition” I have included an extra 20 poems, written after the initial book with each book; “The Book of Pain” and “The Book of Love” each having an additional 10 poems. This being the first interview in this period, I will give you an exclusive and give the titles to those poems;
“The Book of Pain” 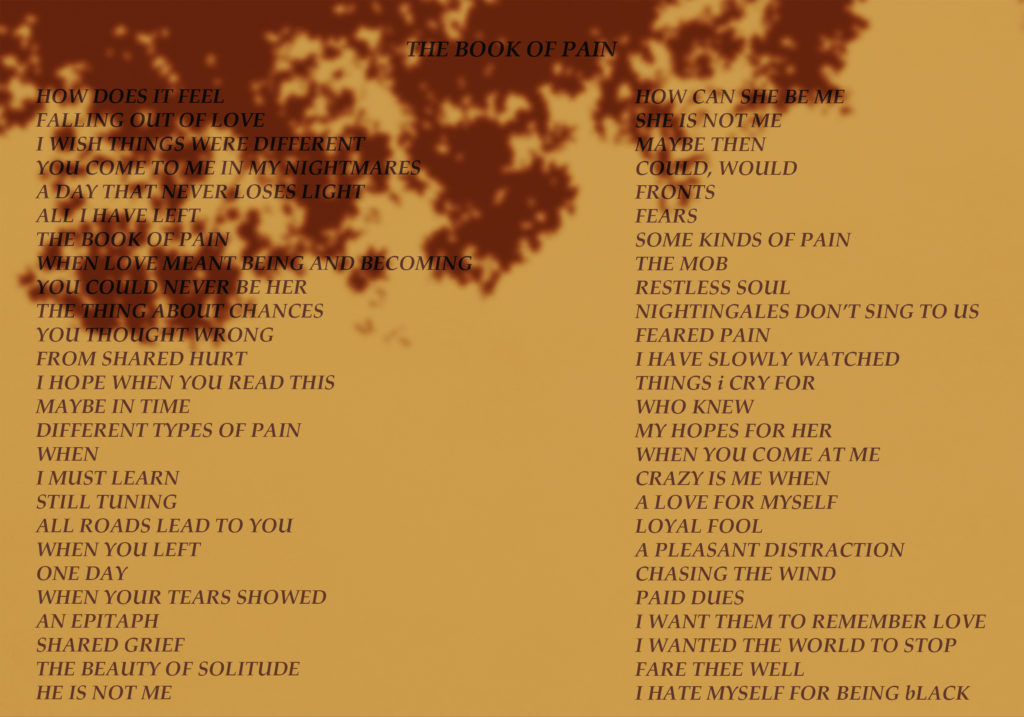 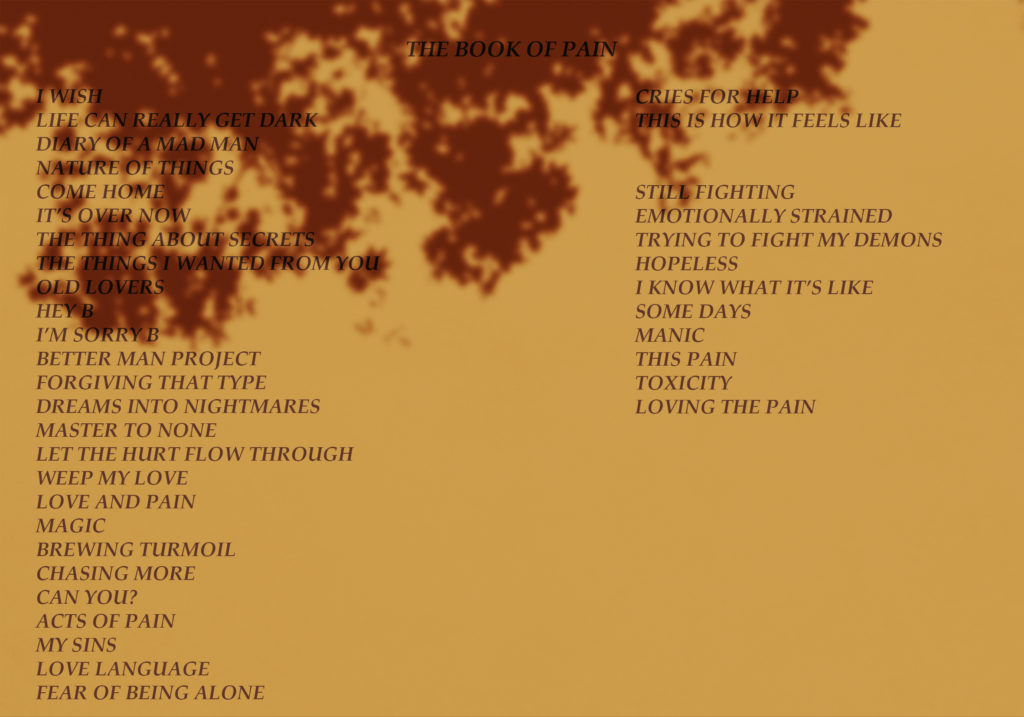 “The Book of Love” 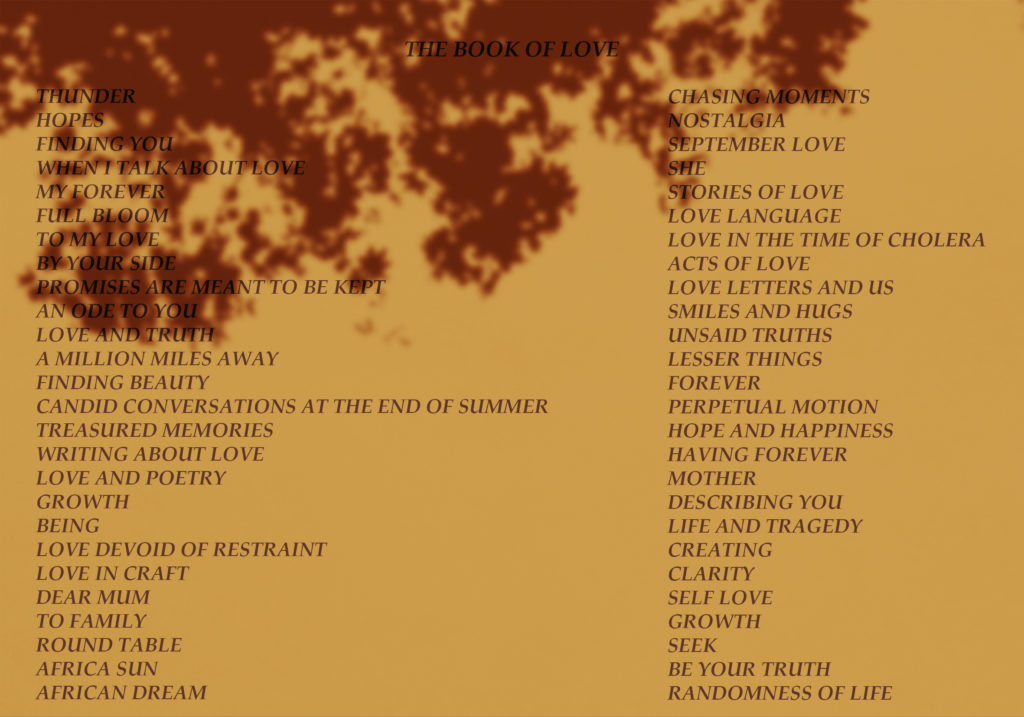 91. Oganga Mangiti
92. Apprehensive
93. The Purity of Love
94. The Pain and Hurt I Caused
95. To The Unworthy
96. No One Told Us
97. Ready for Love
98. Leading Me To You
99. I Took Too Long
100. This Is Love
“Love & Pain: Limited Edition” has a total number of 200 poems, while the base edition, “Love & Pain” has a total number of 180 poems.
3. When did you start writing poetry and what motivates you to write?
I feel like I have already answered this, but to emphasize, I started writing in 2010; that was actually the first time I realized I could write. What motivates me to write? My biggest motivator to write is my emotions, if I feel something, I will more often than not jump to write about it. My other motivator is my back and fourth thought process, I tend to describe myself as a thinker, so there are periods where I will be deep in thought over a particular thing, and if I have figured it out in my mind, and I have a proper conviction, I will write about it.
4. Who is your all time favorite poet and why?
My all time favorite poet is Rumi,a lot of his works have influenced my own, and I would consider myself his biggest fan in this age, I literally have all collections of his translated poetry. His poetry seems to speak to something deeper in me, and that is what draws me to his works; it’s sort of we are on the same journey, and he has made it to the finish line before me, so now, his works are just showing me the way, and this given the fact that he lived in the 13th century.
5. Is this the first of a long list of book?
Is this the first in a long list of books? I really do not know, but I feel like there are so many more poems in me as well as themes I would like to explore and put out, so maybe there are a couple more books in the works, but who knows? It is all by the grace of God, because coming this far, has been nothing but through His will and guidance.

About the author: Wanjiku Maina